Peninsula Hotels are one of the most luxurious hotels in the world, in fact, Peninsula Tokyo won the Best Hotel in Tokyo in 2017. Unfortunately, how that happened remains a mystery to me... 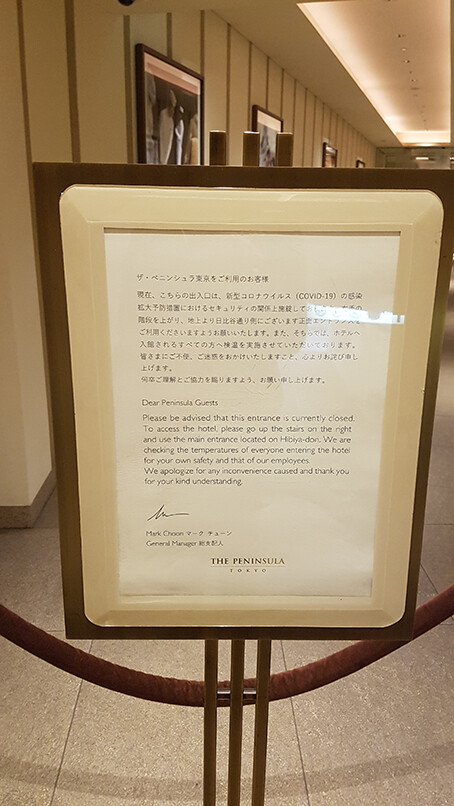 The hotel is located on top of Hibiya metro station. There is a hotel entry from within the station although due to COVID, the entrance is closed and only the main hotel entrance is opened where there's a temperature scanner which is now a familiar sight these days. 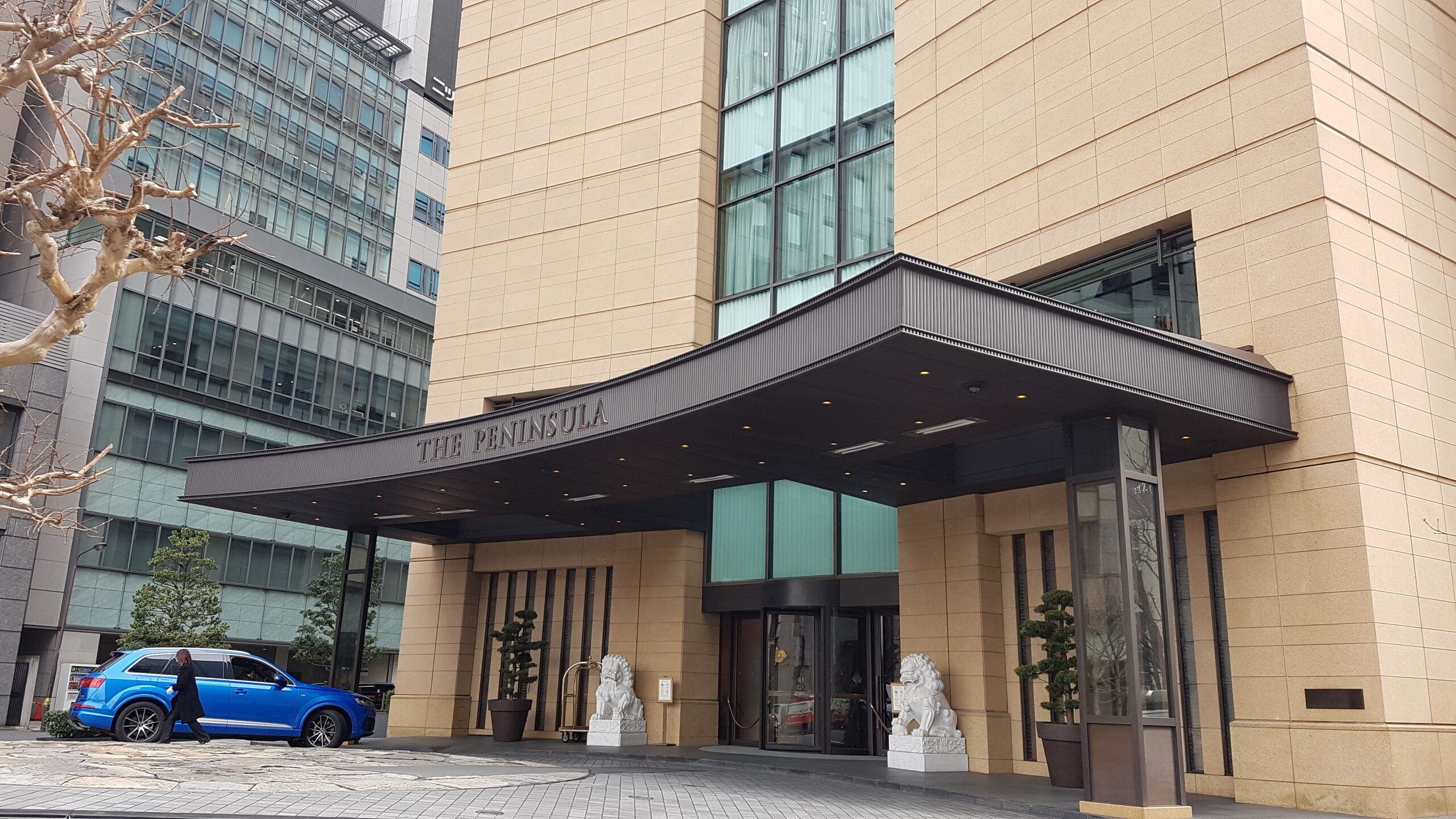 The outside of the entrance very nice and grand but once you step in, you're greeted by people eating at the first floor cafe, talking loudly and cutlery clinging which can make it quite noisy. The eating area is separated to the sides with the walking path straight down the middle so you are walking past people eating to get to the back little area that is the front desk. 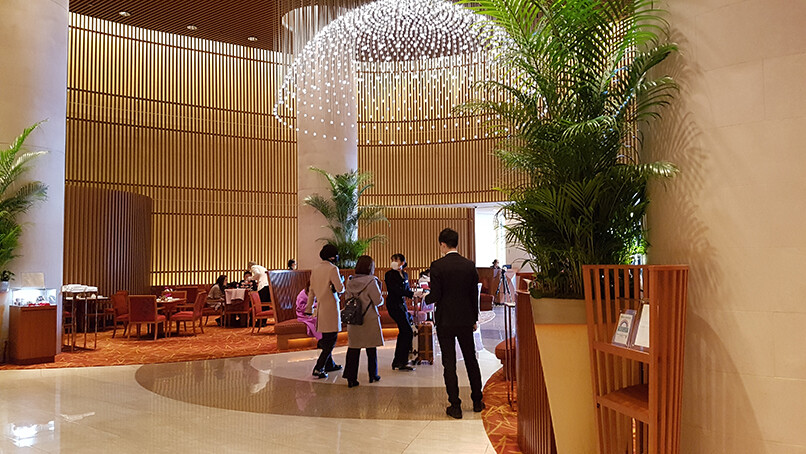 I'm no design expert but imagine you arrive in their famous Rolls Royce pick up but then the first thing you see when you enter the hotel is a whole room full of people eating and you have to walk past them just to get to the check in counter. The feeling of luxury and exclusivity disappears in an instant.

Now for the worst part of this stay: the room. The hotel is not cheap by any means (and if you think it's cheap then congratulations for leaving the financial rat race), and with the price comes expectations. Having said that, I don't have particularly high expectations however, I do expect to have a good night's sleep. 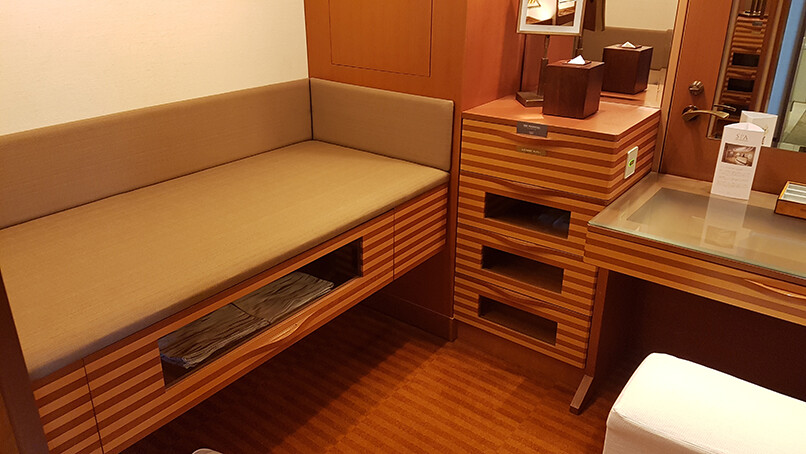 The room is big with a walk-in changing and makeup area. There's a little door where they deliver little things like newspaper without having for you to open the door.

The toilet and bathroom area is nice and the bath is quite big for Japanese standards. You get the usual toiletries and amenities including bath salt.

Now I'm not a very light sleeper but I just could not get any decent sleep here. Even though I was on the 20th floor I could still hear the constant sound of the trains. Trains stop maybe around 12.30am? That's the last time remember hearing the trains. Even business hotels like Toyoko Inn have better sound proofing and they are usually right next to the train stations. 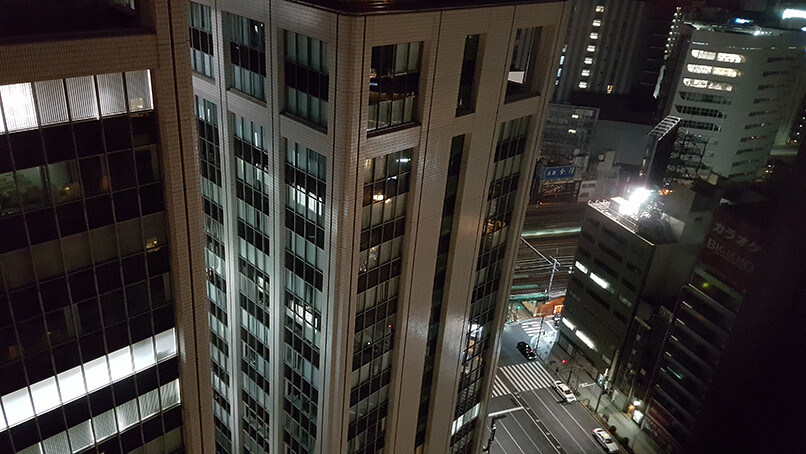 You can just see the train tracks between the buildings and even at this height, it was very noticeable. However, what's worse is the constant humming noise within the room. They need to get some acoustics expert in to look at this because the humming noise gets right into your head. I could not sleep at all because of this and moved around the room during the night and noticed some areas the noise was not as audible but unfortunately the left side of the bed was very loud. My partner was asleep so I thought it was just me and I was going crazy but the next morning when I told her about it, I noticed that the noise was not audible on the right side of the bed. She also noticed the noise when she switched to the left side. I even turned off the air condition thinking it was that but didn't solve the issue. Sitting in the toilet was actually the most quiet area in the entire room. I could have called someone up to get them to look at it but my partner was sound asleep, it was well past midnight and I didn't think they would be able to solve it anyway given that the next morning it was still there.

They also made some effort into providing a minimalist approach by hiding things in the room like the TV and coffee machine but the bed side charger is in a drawer so you need to open the drawer to charge your phone. Not sure why they can't just put in a power point or the wireless charger on the top. Also one of the wireless chargers wasn't working. 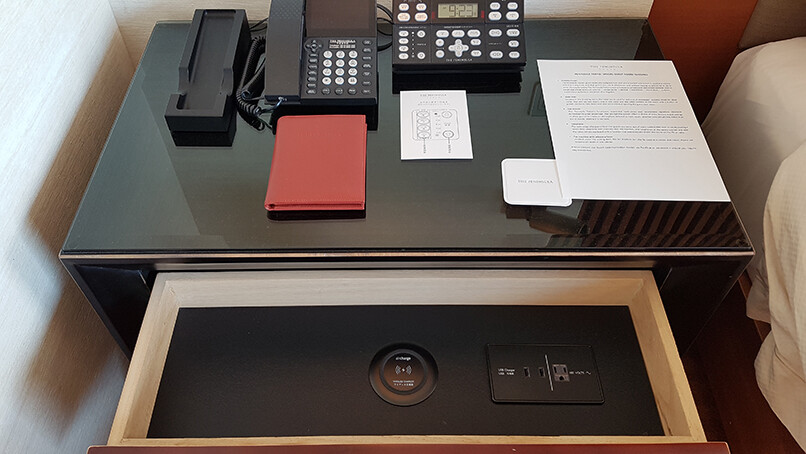 The one nice touch is that the controls have sensors so when your hand is close by, the controls light up so even in the dark you can control the air conditioning etc. 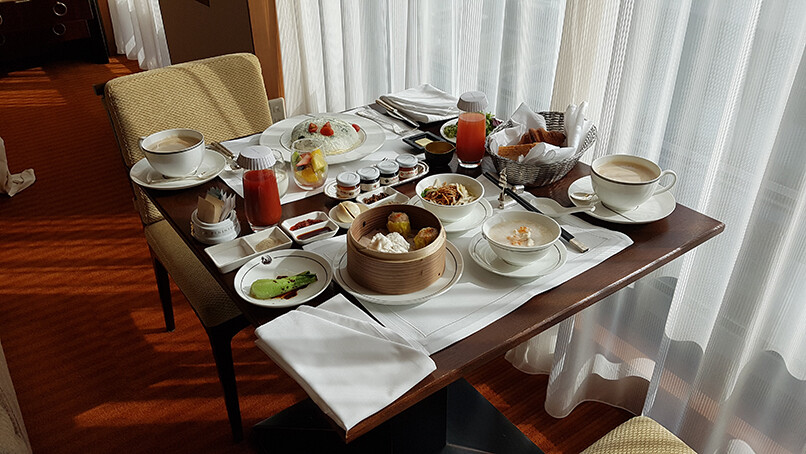 We had breakfast in our room having one of each of the Western and Eastern set menu. The volume is on the small side and if you're a big eater in the morning, it won't fill you enough. The menu included a lot of small portions as you can see from the photo, the Bok Choy was literal one leaf. The only big serving was the coffee in that big cup which is probably two cups of coffee.

Service was nice. Everyone was smiling and helpful as expected but overall the rooms need a huge improvement in sound proofing in order to provide a decent sleeping environment which is the main objective of a luxury hotel for me. Overall, I can't recommend this amazing hotel because there are so many hotels in Tokyo and definitely ones where you can get a much better sleep. I can only assume that not all rooms are this noisy with the humming sound and the train noise but I'm not willing to fork out this amount for another night to find out. If you catch JR, Peninsula is closest to Yurakucho station but with Andaz and Conrad both at the next station on the Yamanote line at Shimbashi station (see reviews), I would give this hotel a pass. 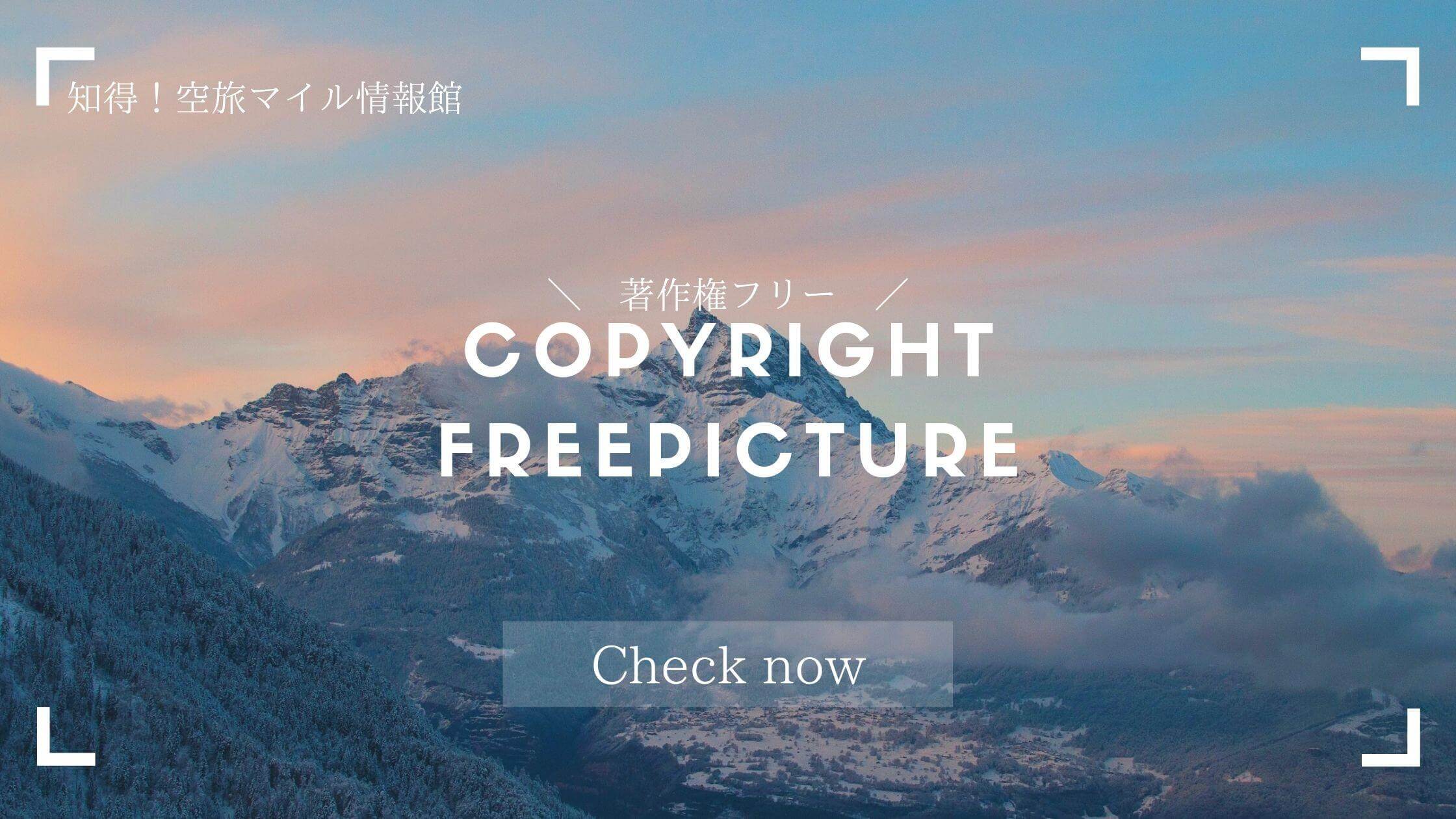 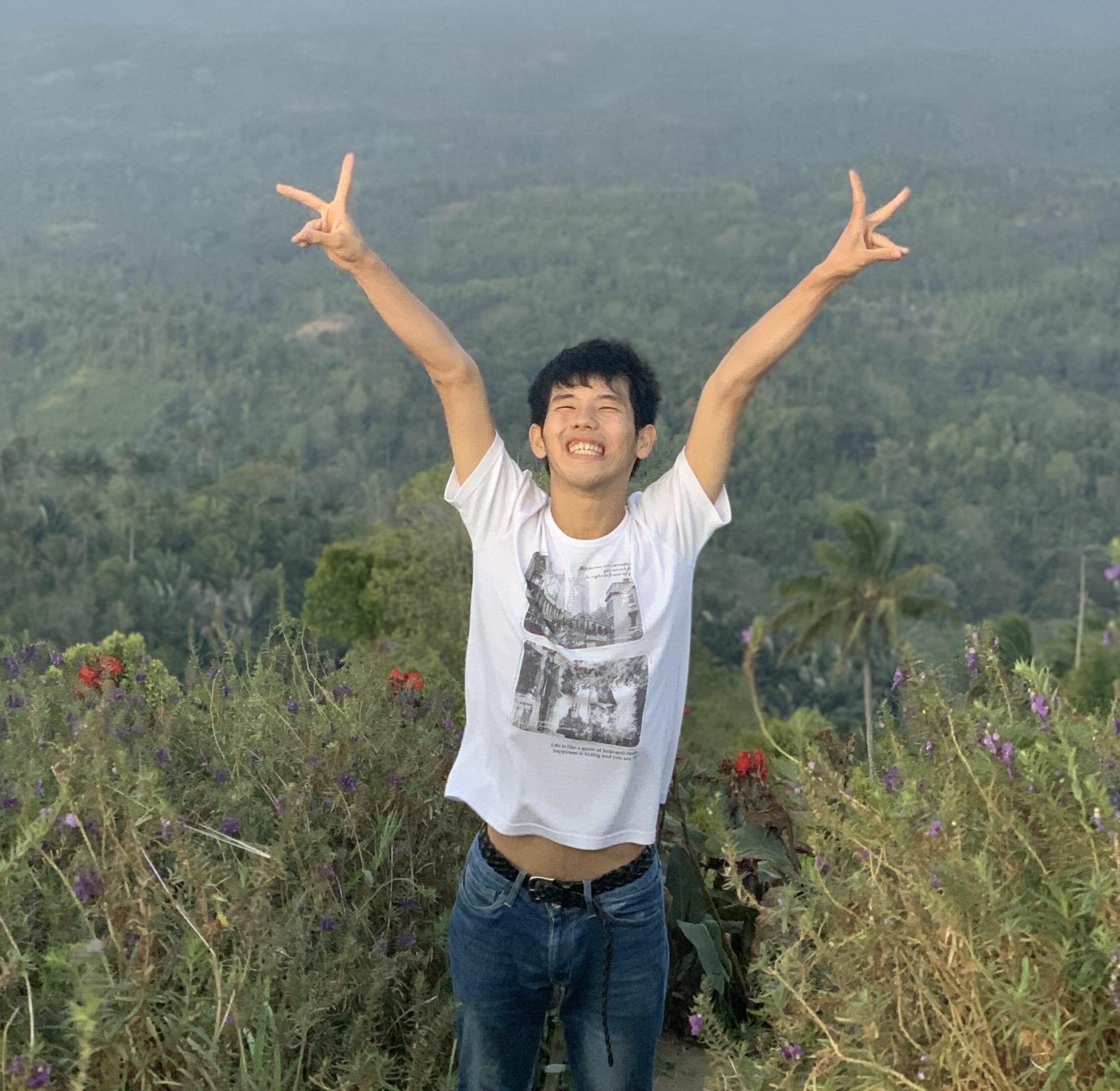